Flags, animals and the world in shreds

This is how Flanimals started: 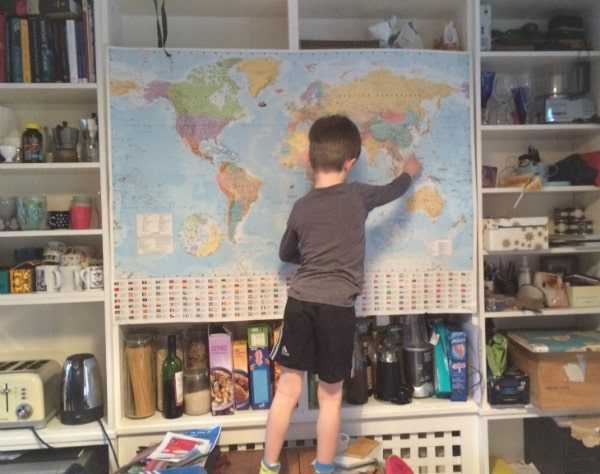 That’s my son having breakfast in front of a 1 x 1,40 meter map finding the flag of Yemen. At the bottom of the map is a strip of flags for each country, each accompanied by a simple coordinate like A1 (not many countries there) or similar. Initially attracted by the pleasing flags, he soon noticed these coordinates and after brief decoding instructions stepped on the table to find countries.

As I like maps as well as my child I started building Flanimals. The rules are nearly as straightforward as the rules of the original breakfast-map-game. Look at the flag and try to drag in into its correct place on the map. Instead of the 2 finger finding system on a cartesian coordinate system, I went for a slightly different route to joy: a trail your flag leaves during the search, colour-coding how close you are to the country in question. The further away you are, the more blue it is - the closer you get, the more red your trail becomes.

This brings in a second game or rather sub-game that we still enjoy frequently: hot or cold. Playing question and answer games or seeking games (like I spy or hit the pot) we guide answer attempts by calling close shots hot and far-off tries cold. It turned out to be a rather good addition to Flanimals, bypassing aggressive frustration from any originally unguided flag-search. The visible trail was in fact entirely unintended to start with and only brought to my attention by a bug in the code and immediately adopted by my son. Priceless accidental beauty.

Flags were fine so far but then he got another map: 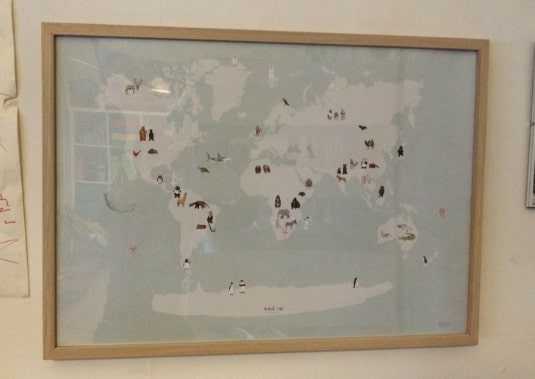 Clearly we needed to add animals. So I sat down for a couple of weeks picking 111 animals worthy of becoming a Flanimal. Finding decent pictures, cutting them, sizing them, collecting sounds for them (damn you, muted coati), gauging their range areas, took a while, especially that last bit. Eventually I made a little app that generates arrays of countries that each animal roams in, based on the eclectic pond of sources I compiled.

Choose between a globe (orthographic) or a flat (robinson) projection, between flags or animals, between German or English. You can change back and forth during the game at any point. Whatever you choose, you might want to turn on the sound to hear a gratifying bing-noise when you find your flag or a surpising animal grunt upon finding where the animal in question roams. Your found flags and animals will be presented trophy-like below the world, allowing you to revert to them whenever and bask in your success. Hovering over the animals will give you some extra information and clicking on them will show their range area. Clicking on the flags will show you that country on the map or globe and hovering over the found countries on the map will tell you about that country and your phenomenal achievements, like how long it took you to find it, how many animals you found living there and, not least, how many points you got. 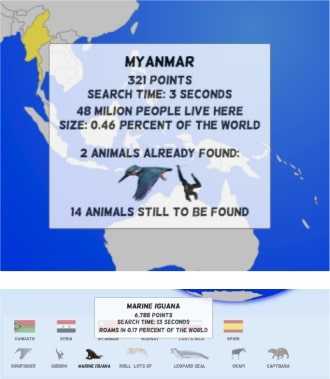 Speaking of which, you get points for each country and animal you find. I worked out an unnecessarily complex algorithm to calculate the points per thingy depending on the size of the country or range area, the time it took you to find it and a few other things I forgot. But it's really fair.

Apart from the lower panel of glory showing your collection of flanimals, you can revel in your stats in summary by clicking on the stats (zahlen) button. You can see how many points you got for which flanimal, how long it took you and more...

For a long time I thought about what happens when you're done. Of course, money was a big favourite. But then my son suggested making the world explode. That made immediate sense to me. So I set out to code a supernova. Funfunfun. It was actually so much fun that I didn't want to tie it exclusively to the very end of the game. Not least because few people have actually made it through 111 animals and 178 flags. I can't blame them and that's why there needs to be a sign in for people to pick it up again.

So now you can sit back and watch the final spin by clicking on the conveniently accessible ENOUGH NOW button. Do it. No loss. It's only a game (and you can enjoy resurrection if you wait for the last shred).

Apart from really enjoing working together with a five year old on this, a big incentive was making maps and globes move with D3. The game was coded purely in Javascript relying heavily on the awesome D3.js. No jQuery (there's D3?!), yet a dash of lodash helped with some data manipulation. One of the more tricky bits was making the world not only spin during the supernova but move on an eliptical path before being shredded by universal powers. I previously would have used SMIL-animations without many qualms, but my bad conscience grows as it really peters out into extinction, making space for CSS animations. While really supporting focus on as few canonical, yet powerful tools as possible, SMIL will be missed. I made it sort of work in CSS animations, yet SMIL allowed me more control over the eliptical path which - maybe for the last time - made me go for SMIL.

Most of the style is pure CSS, but I used the tasty textures.js for the range-areas. Ideally I would've used a bit of Sebastian Meier's d3.sketchy which also looks yummy, but keeping an eye on a lean DOM and process I eventually stuck to simple CSS paints.

What else? The overall Javascript structure is modular with a single g-object keeping data and state for the sake of an unsoiled namespace. Here's the topline module split:

UPDATE 2020: my son is 10 now and is playing less than I do, noticing a few things time has broken. It still works, but please don't be too furious about some blibs you might run into. I hope to fix them soon 🔨